Lunch and Learn: Creating Brands out of a Commodity feat. Neville Ravji

Join us for an interactive Q&A session with Neville Ravji on "Creating Brands out of a Commodity" at Season 52 (Westheimer) on November 15th.

Neville Ravji is the President and CEO of Volterra Energy Holdings (VEH), a Houston-based Retail Energy Provider (REP) which is the parent company of three retail electricity brands – Discount Power, Power Express and Volterra Energy. Prior to Volterra, in 2002, Neville co-founded Tara Energy, one of the first licensed REPs in the then newly-deregulated Texas retail electricity market and was, chronologically, COO/CFO and CEO. Tara Energy was acquired by Just Energy in 2011. VEH was created in late 2013 and started serving customers in March 2014. 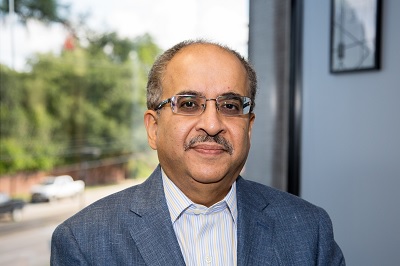 Neville Ravji, President and CEO of Volterra Energy Holdings
I got my MBA from the Wharton School in 1997 with dual majors in Strategic Management and Finance. I was recruited by Enron at Wharton, and worked there from 1997 till the end in late 2001. Fairly broke as a result of Enron’s collapse (and facing an ice-cold job market) three of us “Enron-refugees” decided to take advantage of the deregulating Texas retail energy markets to start Tara Energy, one of the first retail energy providers (REP) in Texas in early 2002 – and were lucky enough to get enough friends and family to give us enough money to get started (as much out of sympathy as anything else, I believe!). Tara Energy targeted the fairly large South Asian (Indian and Pakistani) customer base in Texas (the three of us were from either India or Pakistan). We were able to build a great customer base and grew to $100 MM in revenues in 2008. I negotiated our merger with Fulcrum Power Services in early 2009 after taking over as CEO. Fulcrum had a wholesale power business and also owned Amigo Energy, a mass-market REP. Post-merger, I became President of Fulcrum Retail Holdings, the parent of both Tara and Amigo. We doubled the size of the business in two years and when the business was acquired by Just Energy in late 2011, we were serving about 250,000 customer equivalents.

Post-acquisition, I stayed on for about six months, and then waited out my non-compete by sitting on the balcony of my seventh floor loft and having wine and cheese at 11 in the morning (I don’t really like wine, but I did it just because “why the heck not?”!). I got together with another gentleman who, back in 2002, was the first person after the founders to join the Tara team and who had been head of operations till the acquisition – and we raised some funding (call it angel or Series A or whatever – it has been the only round so far) and started Volterra Energy Holdings. In early 2014, we acquired an entity called Discount Power which had about 2,000 RCEs. We re-launched our South Asian marketing strategy, and expanded the strategy from niche marketing to market segmentation – and built a business around identifying and serving macro and micro market segments – mostly underserved or unrecognized segments per se. Today, we have three brands – Discount Power: our mass market brand, which also serves ethnic markets and other cost-sensitive segments; Power Express: services the millennial market and the multi-family market; and Volterra Energy: partners with pre-aggregated groups, mainly non-profits and co-markets with them. We currently serve over 200,000 RCEs and our projected revenues for 2017 are $150 MM.

So how have we succeeded in creating brands out of a commodity – twice over?

Board and Joseph Wharton Members:
CLICK HERE TO REGISTER